Franciscan Virtues Through the Year: 52 Steps to Conversion from Saint Francis of Assisi

Franciscan Virtues Through the Year: 52 Steps to Conversion from Saint Francis of Assisi is the title of a new book just published by the Confraternity of Penitents.

Written and edited by CFP members, the book highlights 52 different virtues of Saint Francis, one for each week of the year. Each virtue is introduced with a Scripture verse, an incident from the life of Saint Francis, and a writing of Saint Francis. The reader then reflects on the virtue and practices it for a week to incorporate that virtue into his or her life. Doing this will help the reader to live as St. Francis did by following the virtues of the Christian life.

The wisdom of a humble man will lift up his head, and will seat him among the great. Do not praise a man for his good looks, nor loathe a man because of his appearance. The bee is small among flying creatures, but her product is the best of sweet things. Do not boast about wearing fine clothes, nor exalt yourself in the day that you are honored; for the works of the Lord are wonderful and his works are concealed from men. Many kings have had to sit on the ground, but one who was never thought of has worn a crown. (Sirach 11:1-5)

"Blessed are the poor in spirit: for theirs is the kingdom of heaven." Many apply themselves to prayers and offices, and practise much abstinence and bodily mortification, but because of a single word which seems to be hurtful to their bodies or because of something being taken from them, they are forthwith scandalized and troubled. These are not poor in spirit: for he who is truly poor in spirit, hates himself and loves those who strike him on the cheek. (Admonitions 14)

“And those who came to receive life gave all that they had to the poor and were content with one tunic patched inside and out, with a cord and trousers. And we did not wish to have more.” (Testament)

Incident from the Life of Saint Francis

The blessed Francis with the other brethren repaired to a place called Rivo Torto by the city of Assisi. Here there was a forsaken hovel beneath whose shelter those most strenuous despisers of large and beautiful houses abode, and protected themselves from storms of rain. For, as saith the Saint, one ascends to Heaven quicker from a hovel than from a palace. In that same place there dwelt with the blessed father all his sons and brethren in much toil and in lack of all things; very often, wholly deprived of the solace of bread, they were content with turnips only, which in their distress they begged for here and there over the plain of Assisi. Their dwelling was so extremely cramped that they could scarce sit down or rest in it. There was not a sound of murmuring or complaining at these things, but their heart being at peace their mind was filled with joy and kept them patient. . . .

He wrote the names of the brethren on the beams of the dwelling so that each if he wished to rest or pray might recognize his own place, and so that the painful smallness of the space might not cause the silence of the mind to be troubled. Now one day while they were staying there a man leading an ass chanced to come to the shelter where the man of God was dwelling with his companions, and in order not to be driven away, he urged his ass to go in, saying these words, "Go in, for we shall do good to this place." When St. Francis heard these words and perceived what the man meant, he was moved in spirit, for the man thought that the brethren intended to stay there [as owners] in order to enlarge the place, and "add, house to house." And St. Francis went out forthwith, and forsook that hovel, because of what the countryman had said, and he removed to another place not far from it called Portiuncula, where, as was said above the Church of St. Mary was that he had repaired long before. He would have nothing in the way of property that he might the more fully possess all things in the Lord. (The Life of Saint Francis by Thomas of Celano, Chapter XVI)

St. Basil said: “When someone steals another's clothes, we call them a thief. Should we not give the same name to one who could clothe the naked and does not? The bread in your cupboard belongs to the hungry; the coat unused in your closet belongs to the one who needs it; the shoes rotting in your closet belong to the one who has no shoes; the money which you hoard up belongs to the poor.”
Saint Francis embraced this idea. As a young man, he was interested in the finest foods prepared in the most succulent ways and in wearing rich, lavish fabrics which his father sold through the family’s cloth business. Nevertheless, Francis was always generous with the poor. He gave them alms and treated them courteously, but he never really identified with them. Living as the poor lived was the farthest thing from his mind until his conversion. Then Francis realized that “more means less, and less means more.” He realized that he had become the slave of his pride and his possessions, and that, if he wanted freedom, he had to dispossess himself of both.

The Franciscan Virtue of Poverty means doing with as little as you need and keeping things simple. It also means being able to relinquish with an open hand whatever anyone wants or takes away. Those who have a spirit of poverty deal more patiently with loss, because they know that what they owned wasn’t really theirs in the first place -- everything is a gift of God.

Jesus said “Blessed are the poor in spirit”. He is referring to this openhanded attitude regarding everything we have including our reputation, our job, our home, our loved ones, and our time. Jesus is asking us to be humble enough to accept God’s active and permissive will in every aspect of our lives. He calls us to continue to be faithful and loving toward our Creator no matter what happens in our worldly life.

Some people believe that poverty is a relative term. For instance, people whose income is under the poverty line in the United States live in relative luxury, as far as material things are concerned, compared to people in Third World countries. Mother Teresa once commented that people in the West have a different kind of poverty -- not only a poverty of loneliness but also of spirituality. There's a hunger for love, as well as a hunger for God.

At the end of your meditation time, ask yourself: Does poverty attract or repel me? Would I say that I am poor? Why or why not? If I have too many possessions, should I give some away? We always talk about increasing our income level. How can I increase my poverty level? What about a person’s life style or possessions would make me label him or her a “poor” person? Do I agree with Francis’ idea that voluntary poverty of possessions leads to spiritual wealth? Do I know any poor people? Have I ever admired or been inspired by a particular poor person? Why was that person a model for me?

If you are a member of a Religious Order, find one place in your Rule or Constitutions which calls for the Virtue of Poverty. Explain why you chose this section.

Practice the Virtue of Poverty this week. Begin by making a list of all your blessings (be sure to have at least ten). Each day look at your possessions and find one or more that you can do without. Give these to a thrift shop. At the end of the week, you may not be much poorer over all, but you will have made an effort to dispossess yourself of some of your “stuff.” Do you feel that any grace came to you through this? At the same time, make an effort to practice poverty of spirit by responding virtuously to the bumps on the road of your life. These bumps are places to apply the virtues in this book.

Each evening, examine your day for the times when you did or did not practice the Virtue of Poverty. Pray each night, “Lord, I am too attached to my things and to my own will and self. Grant me a spirit of poverty so that I may declutter my physical surroundings and my mental attitudes. Grant me the freedom of an open heart and an open hand, Lord. Amen.”

At the end of the week, record in your journal what you have learned from this exercise. 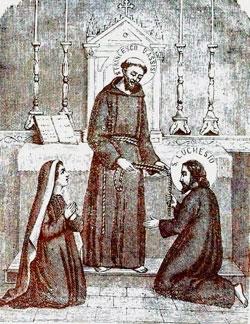